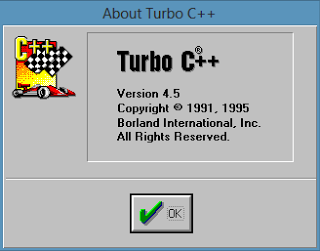 Turbo C++ (pronounced “see plus plus”) is a statically typed, free-form, multi-paradigm, compiled, general purpose programming language. It is regarded as an intermediate-level language, as it comprises both high-level and low-level language features. Developed by Bjarne Stroustrup starting in 1979 at Bell Labs, C++ was originally named C with Classes, adding object oriented features, such as classes, and other enhancements to the C programming language. The language was renamed C++ in 1983, as a pun involving the increment operator.
C++ is one of the most popular programming languages and is implemented on a wide variety of hardware and operating system platforms. As an efficient compiler to native code, its application domains include systems software, application software, device drivers, embedded software, high-performance server and client applications, and entertainment software such as video games. Several groups provide both free and proprietary C++ compiler software, including the GNU Project, LLVM, Microsoft and Intel. C++ has greatly influenced many other popular programming languages, most notably C# and Java.
C++ is also used for hardware design, where the design is initially described in C++, then analyzed, architecturally constrained, and scheduled to create a register-transfer level hardware description language via high-level synthesis.
The language began as enhancements to C, first adding classes, then virtual functions, operator overloading, multiple inheritance, templates and exception handling, among other features. After years of development, the C++ programming language standard was ratified in 1998 as ISO/IEC 14882:1998. The standard was amended by the 2003 technical corrigendum, ISO/IEC 14882:2003. The current standard extending C++ with new features was ratified and published by ISO in September 2011 as ISO/IEC 14882:2011 (informally known as C++11).